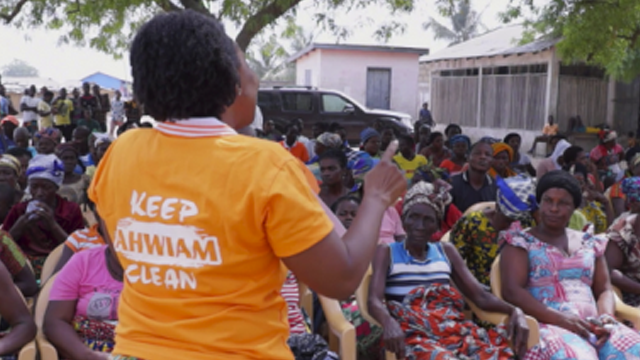 The project “Painting Africa: Women Against Malaria”aims to combat malaria and other diseases transmitted by plagues, raising women’s awareness, and educating them in matters concerning hygiene, cleanliness and sanitation. Thereby, giving them a prominent role in improving sanitary conditions for their families.

The first phase of the project was carried out in the community of Ahwiam near the capital Accra. It involved an intensive campaign of cleaning, waste removal and raising awareness among the population. To do so, there was also participation from the local NGO “Wildaf Ghana”, the local authorities and the local waste management company responsible for rubbish collection in the community. Containers were installed in the places proposed by the community and an agreement was reached on how often the rubbish was to be collected. Although an initiative as such may seem modest, it managed to change the local population’s attitude and mobilize it on a massive scale. In addition, women are becoming true agents behind social transformation.

In order to raise awareness and mobilise the local population in the matter of the importance of suitably managing waste and maintaining good conditions of hygiene, a series of fun, artistic activities were held in which the community of Ahwiam was actively involved. Workshops were organised for adults aimed at showing that waste management is a responsibility as well as a right. Additionally, activities for children were also conducted in order to boost their awareness from a more playful approach.

The second phase of the project began in 2016, with the collaboration of the We Are Water Foundation. Along with them, the architectural project for the construction of a public building with toilets and showers in Ahwiam was arranged. The objective was to create an infrastructured facility, based on environmental and economic sustainability, that would contribute to improving the sanitary conditions of the municipality.

This service, constructed by a local builder and now up and running, is being coordinated by a group of women from the village, financed by the fees from the citizens’ use of the restrooms and by sales from a small shop included in the facilities.