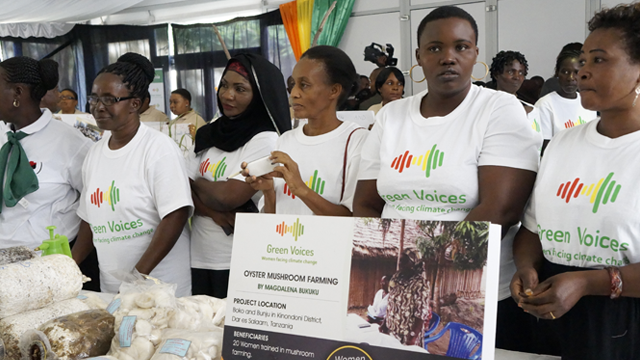 In Tanzania’s rural areas, 85% of women work in agriculture. It is women who suffer the most from the effects of climate change, but, above all, they play an essential role in the responses being given to this situation.

The Voces Verdes project aims to support them in this effort by combining elements of training, entrepreneurship, leadership, and communication in a program that has had enormous repercussions both in Spain, following its presentation at the Autonomous University of Madrid, and in Tanzania, following its launch at a multitudinous event in Dar Es Salaam attended by the country’s Vice-President.

The project involves five Tanzanian women farmers, five social leaders and five journalists who came to Madrid to participate in an intensive course on leadership and climate change given by the Autonomous University in March 2016.

After the training, now back in Tanzania, the 10 women farmers and leaders are developing a green initiative or project in their respective territories with local collaboration. It should be emphasized that in each of these territories, many women have joined these projects, creating a true community of Green Voices.

These projects are being carried out in the areas of agriculture, reintroduction of traditional crops, sustainable energy, beekeeping, etc.

For their part, the women journalists are providing news coverage and dissemination of these projects, amplifying the voice of their colleagues. The aim is to turn the participating women into green spokeswomen who, with broad social support, can generate opinion and awareness of the problems arising from climate change and promote palliative solutions to a warming that is already making itself felt in the country.

As committed and generous as ever, the composer and singer Luz Casal has written for this project the song Voces Verdes (Green Voices), which has been recorded by eight Tanzanian women in Dar Es Salaam and which will be the project’s theme song.

In December 2019, coinciding with the celebration in Madrid of the United Nations climate summit COP 25, we presented the documentary “Voces Verdes”, which shows the entire development of the project. This documentary has been sponsored by the Cabildo de Gran Canaria, to whom we are grateful for the support provided through its Department of International Solidarity.