Brenda Namumba (1986) is one of these women who break glass ceilings. In Zambia, her country, she has been the first woman to obtain a PhD in Astrophysics.

Her preparation and passion for astrophysics made her worth of one of the Science by Women fellowships, that the Women for African Foundation grant to those African female scientists thanks to the collaboration with the most prestigious Spanish research centers.

Brenda Namumba will carry out her investigation in the Instituto de Astrofísica de Canarias (IAC), which she will join as soon as the pandemic allows it.

In addition to her scientific activity, Dr. Namumba makes a great informative labor to encourage young girls to get interested for science in general and, specially, for astrophysics through talks and conferences.

We spoke with her on the International Day of Women and Girls in Science.

What encouraged you to pursue a scientific career? What made you incline towards astrophysics?

I grew up as an exceedingly inquisitive child, continually eager to understand what’s going on around me. At primary and secondary school, It was generally straightforward for me to understand scientific concepts as compared to social sciences. All things considered, I knew at an early phase of my academic journey in science. I should emphasize that even if I didn’t know precisely which area of science I would eventually pursue, I knew prior I’d pursue a career in science. I decided I wanted to pursue my career in astrophysics back in 2009 when I attended my first ever academic workshop known as the IHY-SCINDA workshop. listening to presentations, talks, and interacting with experts and students in space science and astronomy made me realize how much we can learn about our Universe. I became curious and interested to learn more and the rest is history.

Have you felt supported throughout your career?

I have always received tremendous support from my parents. Since I was a child, they told me that I could break down barriers if I only believed in myself and worked to achieve my goals. I must say that they have been my greatest support thus far. I have met great mentors who have been helpful throughout my career. My PhD supervisor Prof. Claude Carignan has been very supportive both academically and mentally. From a financial perspective, I have been fortunate to receive scholarships/bursaries from my first year of undergraduate studies until I obtained my doctorate. I appreciate that, because it would have been hard or impossible for me to reach this far without the financial assistance I received. 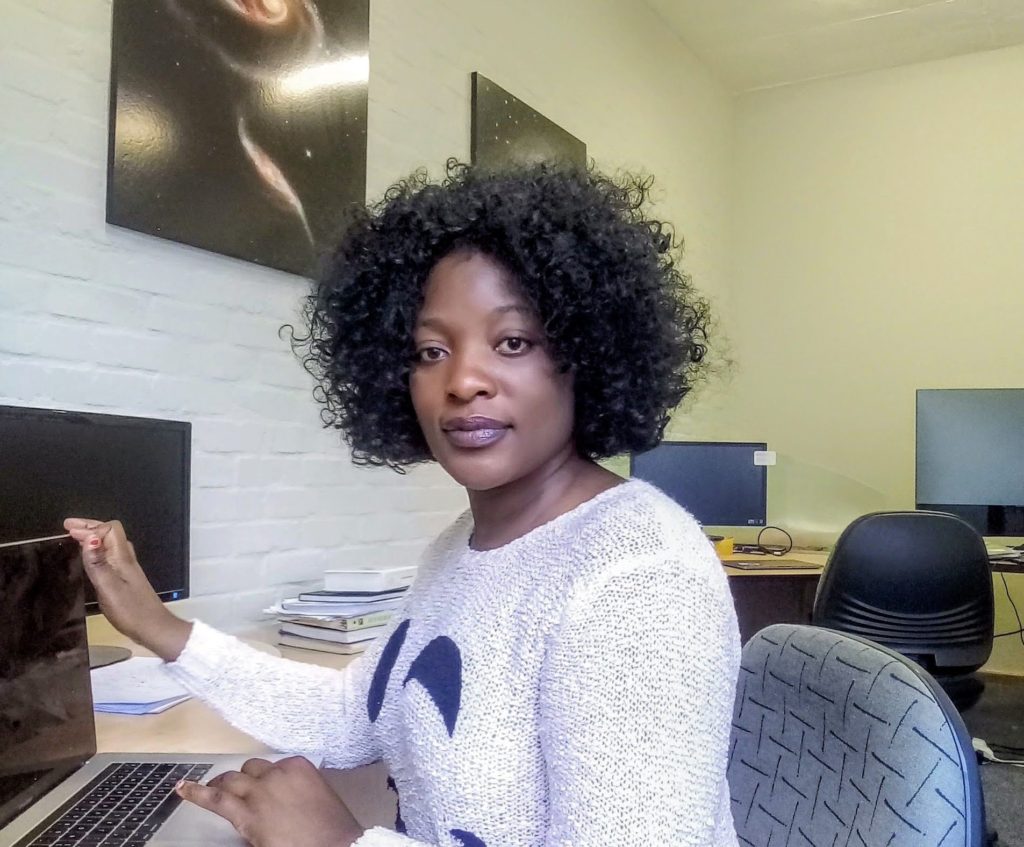 Do you feel that being a woman has made it harder for you?

For me, the most difficult part of being a woman in science is linked to societal norms about who should pursue a career in science. ‘Science is hard, and science is for men, not women,’ and so forth. I hear that more often than not. Someone once told me “you are doing well in your PhD because you are a woman and women are favored and given less complicated tasks than men, if you were doing what I do I doubt you would even go halfway”. I believe we have  a lot of people, both men, and women who have excelled in their science careers and this has nothing to do with gender but hard work and passion.

How do you think your work can help your research area?

I am a postdoctoral fellow at Rhodes University in South Africa, focusing on neutral hydrogen in neighbouring galaxies, galaxy formation, evolution and star formation. My current job provides the appropriate resources and tools I need to advance and exile my research career. South Africa is one of the countries of the world with world-class telescopes necessary to unblock the mysteries of the Universe. It is my pleasure to be part of a group of African astronomers participating in this cutting-edge scientific research.

What do you expect from your stay in Instituto de Astrofísica de Canarias (IAC)?

I am interested in developing skills for observing galaxies at other wavelengths such as optical than HI. In my opinion, the Instituto de Astrofısica de Canarias (IAC) is the best place for me. I will mainly participate in the WEAVE-Apertif full-field spectroscopic study on the dynamics of neighbouring galaxies using the world’s leading new WEAVE instrument on the 4.2 m William Herschel telescope. In return, the IAC is very interested in the knowledge transfer that I can bring with me in modern radio astronomy.

Have you had models of women scientists who have inspired or supported you?

When it comes to my academic journey, I never had a role model growing up.

Being one of the first females in my immediate family to go to University and later pursue postgraduate studies, I really didn’t have anyone to look up to. Today I look up to people like Prof. Mamokgethi Phakeng, the vice-chancellor of the University of Cape Town. Her approach to educating young Africans on the benefits of education is admirable. As a woman in STEM (science), the first black South African to have a Ph.D. in Mathematical education she depicts how African women can exile in their careers through hard work.

What would be your advice to a girl who wants to pursue a career in science and more specifically in Space Science and Astrophysics?

Girl, don’t underestimate yourself, you are capable. I have done it and I believe you can do it as well so go for it!!! When it comes to choosing a career listen to everyone but believe no one because you know yourself better than everyone else. There is nothing to fear when it comes to pursuing a career in science, all you need is passion and hard work. As you pursue your career, surround yourself with excellence, people who understand your dream. Astrophysics is quite diverse. It lets you explore the cosmos and brings you into contact with nature. It also makes it possible to take part in the advancement of technology, which is beneficial for mankind, for example the development of the mammogram. I encourage young girls, especially in Africa to take keen interest in Astrophysics.

If you want to add anything you can do so

To my fellow women in science especially in Africa, if we want to see an equal presentation of women in science then we have to take it up upon ourselves to encourage and motivate young girls on the benefits of education and later STEM. We need to kindle girls’ interest in science and work hard to keep it. As Marie Curie once said “ Nothing in life is to be feared, it is only to be understood. Now is the time to understand more, so that we may fear less”

“I want to thank the Mujeres por Africa Foundation for the funding to advance my research.”