Dr. Rashidatu has a degree in Medicine and Surgery and a Master’s degree in Tropical Infectious Diseases. She is now pursuing a doctoral program in epidemiology and public health, supported by the URJC  within the Learn Africa scholarship program.

The COVID-19 Outbreak: Its Effect on the Women of Sierra Leone 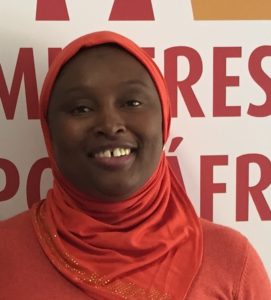 Spanning from a decade-long civil war in the late 90s; the 2014 Ebola outbreak in the Mano River Basin of the West African sub-region with the country one of the epicentres to mudslides and flash flooding and, now, the coronavirus disease (COVID-19), Sierra Leone, a tiny state in the sub-region, has once again been thrown into the spotlight. And the sad reality of crises is that women and children are at the receiving end of the heavier brunt of the suffering.

With a little over half of the country’s 7.5 million population female (51.1 %), Sierra Leone recorded its first case of (COVID-19) at the end of March this year (as at writing, 10 cases have so far been reported). The country has just recently concluded a 72- hour lockdown rolled out to reduce transmission of the disease. In succession, the government announced an added 14 days partial lockdown and curfew as some of its precautionary public health measures. Speculations are however, rife that a complete lockdown might ensue if the country continues to report new cases.

Sierra Leone has suffered other confinements

For most Sierra Leoneans, lockdowns are no longer a strange phenomenon. When in 2014, Ebola disease outbreak was ravaging the country, the authorities declared a state of emergency and a lockdown was enforced. During the 1997 military interregnum that witnessed ousting of the civilian administration of the late former President Ahmed Tejan Kabbah, several draconian curfew orders were instituted by the then military junta, characterized by loss of countless human lives either from hunger and starvation or by gun violence perpetrated by the Junta operatives.

Reflecting on those horrendous days, one wonders how women, who are mostly the breadwinners of many homes as well as being caregivers, sustained families in a society where livelihoods are best described as ‘hand-to-mouth’. Most engage in petty trading, using proceeds from their daily commercial activities to take care of their families.

I could still recall, during those junta days in 1997/98, harrowing images and instances either of pregnant women and mothers’ enduring stillbirths, spontaneous abortions and/or watching their children dying needlessly from preventable and treatable diseases due to limited access to health care services. For those who dared to breach curfew in search of food, they were either killed by rebels or suffered grave and humiliating punishments at the hands of military personnel. Women and young girls who were captured by insurgents were forced into servitude or to bear responsibilities as wives. In grim circumstances when they became pregnant, and their services no longer considered useful by their ‘bush-husbands’ or ‘keepers,’ they were mutilated and killed.

It is heart rending to also note, in an article published by Wong et al, that Sierra Leone reported about 2, 536 deaths with female mortality of 63 percent during the 2014 Ebola outbreak. Studies revealed also that in some instances, women and children died not directly from the virus but as a result of disruption in health service delivery. Jones et al. in their publication, “Women and babies are dying but not of Ebola” reported 18 percent decrease in antenatal care visits, 23 percent decrease in postnatal care visits and 11 percent decrease in women accessing health facilities for births with resulting 34 percent increase in maternal mortality and 24 percent increase in stillbirths.

Sierra Leonean women are no strangers to difficult times. They are very resilient, and the best of them have always come out when their backs are pressed to the world. Hear the stories of some I spoke with on the lockdowns:

Respondent 1: I understand that staying at home will help us to reduce the disease, but how are we going to feed our families? We do not have savings in the bank. I go to hawk my vegetables daily and, in the evening, I buy foodstuff and return home to prepare the day’s meal for my family. It would be difficult to survive, and we do not know how long this is going to last.

Respondent 2: I work as a nurse at the Ola During Children’s hospital and we see children daily with flu-like illnesses. Now, I am afraid to go to work because I don’t know who amongst those children is/are infected with COVID 19. We are not adequately prepared. We do not have PPE’s.

Respondent 3: As a banker, we were asked to work from home during the three-day lockdown. I received up to 50 calls a day from customers who were having transaction difficulties. If this were to continue, it would cause immeasurable stress and problems for our customers.

Respondent 4: I cannot believe this is happening to us again. God! What have we done…? I lost my first and only child during Ebola, how can we suffer from this disease again?”

Respondent 5: It is a difficult situation. In my life, I have witnessed two periods of lockdown; when we had the rebel war and when we had the Operation Western Area Surge for the Ebola, and they were not good times at all. I can only envisage a similar situation in this country.

Respondent 6: My sister, if my children became sick, where should I take them? It is reported that doctors and nurse are not going to work; we will die. Another Ebola again?”

Respondent 7: No work, no school, children cannot go out to play. It is hard because even though what the government is doing is for our safety and protection, but we don’t know how long this will last.

It is clear from these responses that women are bracing themselves for murky days ahead with dire consequences. There have been untold stories about women and girls suffering from domestic violence with consequences of prostitution, teenage pregnancy, unwanted pregnancy and school dropouts getting worse in these difficult times. In his article “Corona lockdowns expose young girls to unintended risks in Sierra Leone’ the author Mohamed Stom Koroma  wrote that the aftermath of the lockdowns could be more devastating than the virus itself.

Another article making the rounds by one of Sierra Leone’s psychiatric specialist Dr Abdul Jalloh, emphasized the implications of reliving and reexperiencing traumatic events. The article identified mass panic, undue stress and apprehension as symptoms of Post-Traumatic Stress Disorder.

Although these symptoms are experienced in both sexes, women mostly react with severity when they look on helplessly at their children incapable to adequately provide food and necessities for them. Implementing lockdown is prudent in these difficult times. It, however, brings out the socioeconomic and psychosocial challenges in a poverty-stricken country where the average Sierra Leonean lives on 1 USD per day under “stable conditions”.

And for the women caught between a rock and a hard place, it comes as no surprise that the slogan now making the rounds on radio talk shows and the marketplace is, “hunger will kill us before Corona”.