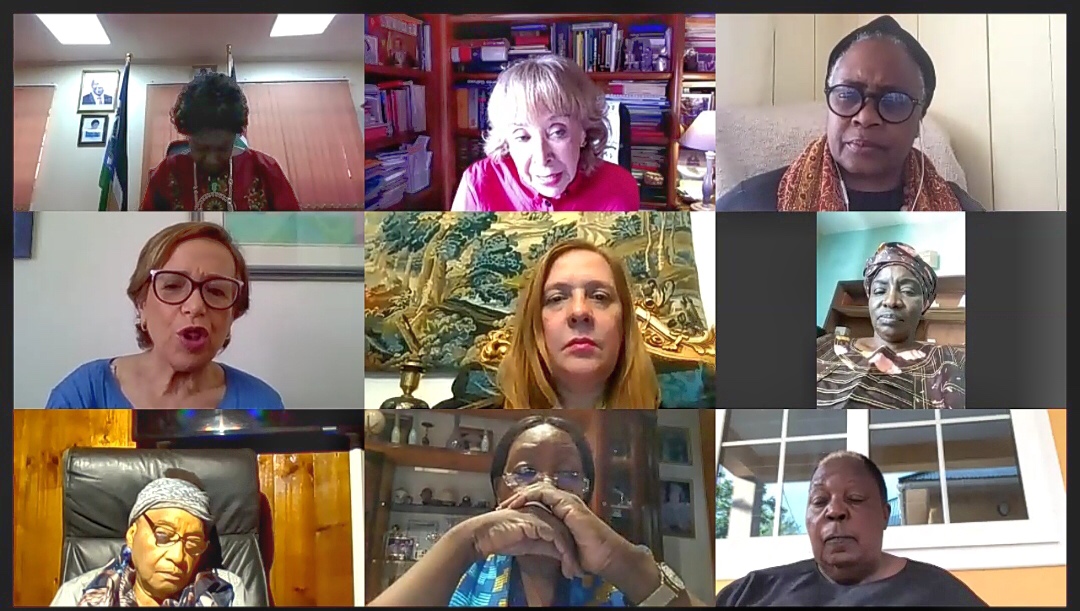 Madrid, May 19. Women for Africa is adapting its projects to the new situation created by the coronavirus pandemic. The goal is to ensure that women, particularly African women, are not once again the victims but the protagonists of the solutions to the crisis.

In order to contrast the adjustments that the Foundation has made to its different projects, President María Teresa Fernández de la Vega held a virtual meeting with the African advisers of Women for Africa, in which was also approved the Statement that expresses the Foundation’s philosophy and demands in the face of this crisis.

María Teresa Fernández de la Vega explained to the advisers the changes in the Foundation’s programs. She affirmed that for the first time, it is possible for this great goal for women, particularly African women, to come out stronger and not losers of this pandemic as they have always been in crises, and that we must fight for it.

She explained that the progress made by women in recent years demonstrates that equality is beneficial for everyone and this makes it possible for the crisis not to diminish equality but to be a decisive step forward in this fight. To this end, she stressed that feminist public policies are needed.

“We have to show,” she said, “that we are the women who can best cope with this crisis, that equality works from day one, that when it comes to life’s frontlines, women are the experts.”

In the Foundation’s president’s call for unity, leadership, realization of  women’s ideas and labor, she emphasized that this being such a painful crisis, all of us who work for equality, for a more just world, reoriented towards people, where the life and security of citizens are more important than economic benefit, must also consider it an opportunity.

With regard to the adjustments in the Foundation’s projects, the president announced a new health project aimed at nurses in Ghana, which will incorporate online training by Spanish nurses; visibility and enhancement of their important role; research on the impact of the pandemic with data disaggregated by sex and for social leaders to agitate against gender violence, the worsening of which is one of the worst consequences of this crisis for women worldwide.

She expressed her concern for the violence and defenselessness of women in conflict zones. In order to address this problem and examine the opportunities for peace that the crisis may generate, as well as the increased participation of women in the advocacy and mediation processes, a virtual forum is being prepared with ECOWAS.

As for programs such as the one dedicated to women entrepreneurs in Kenya, Launch&Grow, or the Yale political leaders’ forum, they will be conducted virtually. The Learn Africa scholarship program will also reconvert its offer to online postgraduate courses and the sixth Ellas Investigan call will be dedicated almost entirely to projects related to the coronavirus.

All the participants in the meeting who agreed with the adjustments in the Foundation’s projects, also highlighted the problematic issues faced by women specifically African women, in this pandemic and the need for them to exercise their leadership, by participating in the decision making and management of the crisis.

They pointed out that for this reason the digital gap must be closed and women must have access to new technologies, women’s input must be valued, their enterprises should be supported and to ensure that a just world with fewer inequalities emerge from this crisis, they must fight more united than ever.