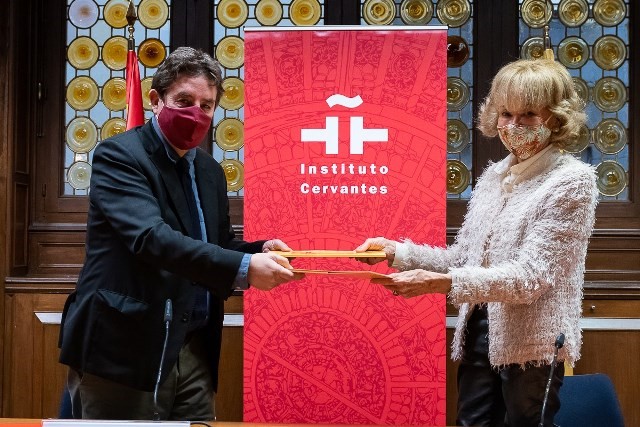 Madrid, 9th of April 2021. Pedro Sánchez, President of the Government, accompanied by Cristina Gallach, Secretary of State for Foreign Affairs and for Ibero-America and the Caribbean, and Olga Cabarga, the Ambassador of Spain in Senegal, visited this afternoon in Dakar what will be the first Cervantes Institute in the Sub-Saharan Africa, where the Women for Africa Foundation will have a space to perform its own programs related to the Spanish language.

Last December, Women for Africa and the Cervantes Institute, represented by María Teresa Fernández de la Vega and Luis García Montero, signed the collaboration agreement by which this accomplishment is provided.

Among the work lines that Women for Africa will implement in this space is the program “Ellas lideran en español”, in which conferences will be given by Spanish-speaking women, especially African-Americans, who are a reference in different areas of society. The aim is to strengthen ties between these women, as well as their south-to-south collaboration.

The creation of a school for translators and interpreters will also be promoted, an initiative that is increasingly in demand with the growing presence of Spanish companies and institutes on the continent.

Another proposal is to institute a virtual library of Hispanism and Spanish literature written by women, a didactic and educational resource available to the departments of Spanish universities, students and everyone interested in this language.

In addition, the Foundation will prioritize Spanish language studies in its program Learn Africa of postgraduate scholarships for African women students.

In 2014, Women for Africa celebrated in Abidjan, Ivory Coast, the I African Spanist Meeting Africa with Ñ, the first one to be held on the continent.

It is also important to note that the creation of the Aula Cervantes in Dakar, which now will lead the way to the Institute as the only representation of the Cervantes in Sub-Saharan Africa, was the result of one of the Meetings of Spanish and African Women for a Better World promoted by María Teresa Fernández de la Vega during her period as Vice President.