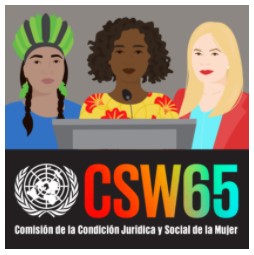 Madrid, 17th of March 2021. María Teresa Fernández de la Vega, President of the Women for Africa, has attended this afternoon the series of conferences organized by the Karama Organization in parallel to the celebration of the Commission on the Status of Women (CSW65) at the UNO, which is taking place from March 15th to 26th.

The Karma Organization is a civil society network that gathers groups and activists of women in 13 countries of Africa and the Middle East.

The series, entitled “Women in Leadership in Law, Politics, and Peace”, started yesterday 16th of March in Cairo and will have the participation of more than 50 speakers, mainly from these countries, but also with the participation of others (the director of UNWomen in Colombia, spanish Bibiana Aído, spoke in the conference yesterday) to analyze this issue, which is undoubtedly fundamental for progress in equality.

María Teresa Fernández de la Vega gave the opening conference this afternoon in the panel “From Paper to Practice: Judicial Perspectives in the Success and Failure of Legal and Constitutional Reforms”.

During her speech, the President of Women for Africa recounted her experiences as a woman committed to freedoms and feminism in the Spanish transition to democracy, as well as in her period as Vice President of the Spanish Government, during which three important Laws were approved: Equality Law, Violence Against Women Law and Dependency Law.

Regarding the first of these periods, she remembered that “when the transition to democracy began, Spanish women could not obtain a passport, could not open a bank account and we barely started working outside our houses without the consent of our husband or father”.

She also remembered that adultery and cohabitation were punishable, mothers did not have parental authority over their children and contraceptive methods were prohibited. She emphasizes the paradox that occurred after the Amnesty decree of 1976, when political prisoners began to enjoy freedom while women were imprisoned for adultery or for using contraceptives.

As stated by Fernández de la Vega, the regulations were changing thanks to the action of women and the allies they found. “Groups of Women Lawyers, of Separated Women, of University Women; groups of women in neighborhood associations, that were very active in Spain at that time, and other people enrolled in political parties and unions or, simply, feminist groups. We started to work together and, despite the ideological or strategic differences that definitely existed, we joined in platforms of feminist organizations. And it is clear that feminism was pluralistic and among its members there were differences, but we could work together”.

In 1977 three legal changes that were fundamental happened. They were: cohabitating and adultery were decriminalized, contraceptives were allowed and the ages of women for the classification of abduction were regulated.

Regarding her period as Vice President of the Spanish Government, and referring to the Equality Law, which she defined as pioneering and transcendental, Fernández de la Vega pointed out that “for the first time in Spain, almost 30 years after our Constitution and more than 10 years since the Beijing Platform for Action, concepts such as discrimination based on sex, sexual harassment, positive actions, mainstreaming… were defined in the framework of an organic law. A whole series of principles, strategies and actions leading to improve and prevent inequality and discrimination between men and women and to promote gender equality”.

María Teresa Fernández de la Vega did not hide her concern about the times we live today: “The situation resulting from the pandemic has aggravated the challenges for equality and the 2020 Report on the 2030 Agenda has confirmed that the risk of retreat in relation to SDG number 5 is very real. That is why we must not let our guard down. We must keep working. Because after this big crisis, politics will be accelerated again. And we have to be there.”