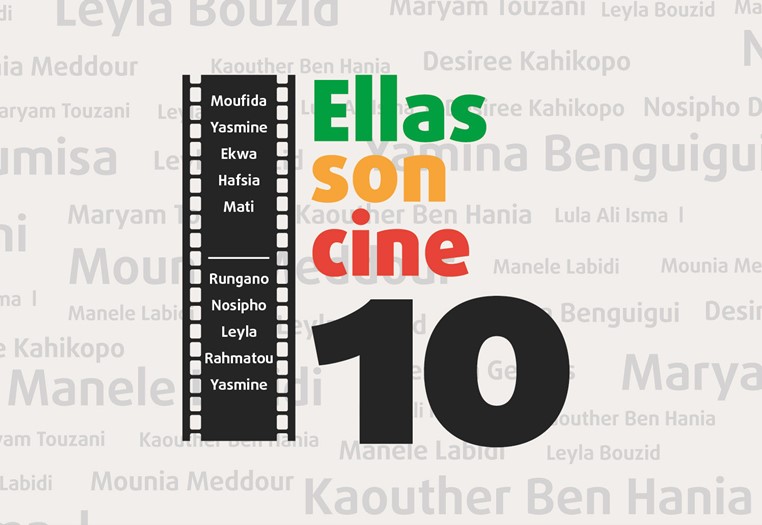 Madrid, June 6, 2022. For the tenth consecutive year, and also on the occasion of the tenth anniversary of the Women for Africa Foundation, the cinema exhibition Ellas Son Cine returns, which will take place from Tuesday May the 17th to Saturday May the 21st at our usual venue Sala Berlanga, the SGAE Foundation’s movie theater.

To celebrate the screening’s tenth anniversary, ten films will be screened instead of the usual five. Ten films produced by African female directors along with which we present a plural, innovative and feminist vision of the African film scene. Every day there will be a double session at 6:00 p.m. and 8:00 p.m. In the first shift some of the best films that have passed through Ellas Son Cine during the nine previous editions will be screened. While every day at 8:00 pm you can enjoy great films unreleased in the cycle, although unlike other years, films from other decades have been included in order to provide a broader perspective to the realities shown.

On Tuesday, May 17, the opening will take place at the 8:00 p.m. session with the presence of our President, María Teresa Fernández de la Vega, the directors Nadia El Fani (Tunisia), Machérie Ekwa Bahango (Democratic Republic of Congo), Desiree Kahikopo-Meiffret (Namibia), Nadine Ibrahim (Nigeria) and the commissioner of the exhibition, Guadalupe Arensburg.

These directors will also participate in a round table discussion, moderated by Inés París, as part of the international conference Women’s Bridges. Proposals from the South for Global Change, which is also organized by Women for Africa. The conference will be attended by more than 80 top-level African and Latin American political leaders, on May 19 and 20 in Madrid.

I Am Not a Witch, by Zambian Rungano Nyoni, will be the first film to be screened at the exhibition. Multi-award-winning film of 2017 that, among others, won a Bafta Award and the British Independent Film Award for Best Director. This will be followed by Les silences du palais, by Tunisian Moufida Tlatli. This 1994 intimate drama is considered the first feature film directed by a woman in the Arab world.

On Wednesday 18, Nommer 37, an intense South African thriller with Hitchcockian overtones directed by Nosipho Dumisa, will be projected at the first screening. Afterwards, at 8:00 p.m. there will be a screening of L’enfant endormi, the Moroccan film by Yasmine Kassari that participated at the Venice Film Festival in 2004 and won at the Mar del Plata Festival in 2005. It is a harrowing drama about immigration and waiting, with traces of magical realism.

Thursday 19’s program is dedicated to music and dance. It will begin with À peine j’ouvre les yeux, by Tunisian Leyla Bouzid, a 2015 vitalist film about the awakening to adulthood of a rebellious and nonconformist young woman. Later, Farewell Amor, a 2020 film directed by Tanzanian Ekwa Msangi that tells the story about the reconciliation of a family of immigrants in the United States through dance, will be played.

On Friday, May 20, the second screening is dedicated to Bonne mère. Second feature film by actress and director Hafsia Herzi, and an unreleased film in our country. Although, it won the award in the Un certain regard section for Best Cast in the 2021 edition of Cannes. In the first shift, at 18:00, the Nigerian drama Zin’naariya! a 2016 film directed by Rahmatou Keïta will be screened.

On Saturday, at 6:00 p.m., it is the turn of Jusqu’à la fin des temps, a 2017 Algerian film directed by Yasmine Chouikh, which tells a story about the love of the elderly in the Arab world, a theme that is almost unknown of in Maghrebi cinema. The show will close at 8:00 pm with Atlantique, winner of the Grand Jury Prize at the Cannes Film Festival in 2019. Directed by the French-Senegalese Mati Diop, Atlantique is a story of poverty, social inequality and immigration with tinges of fantastic and horror cinema, an original and risky proposal that has earned it multiple and important awards.

If there is one thing in common between the films screened in this tenth edition, it is their contribution to building bridges between Africa and the rest of the world through a feminine, feminist and egalitarian point of view. In a world as globalized as the one we live in, it is necessary to establish fruitful and prosperous communication networks that go beyond commercial development and take into account the human component. In conjunction with the summit Women’s Bridges: Proposals from the South for Global Change, held on May 19 and 20, the Ellas Son Cine series also seeks to exchange experiences and thoughts that inspire proposals for a positive transformation of our societies.

The audiovisual world plays a very important role in breaking the barriers that are an obstacle to equality between men and women. That is why the Women for Africa Foundation has considered this domain as one of the most important ones in its action plan.

Ellas son cine is the main audiovisual project of the Women for Africa Foundation. The aim of the exhibit is to promote the knowledge and enjoyment, at the national level, of films directed by African women. Before celebrating its tenth anniversary, Ellas son Cine has screened 47 feature films and 7 short films from 20 different countries.

To see the promotional video of this tenth and very special edition click here.