Mariama Badji is the Director of Communication of Cora and President of Africa Feliz Senegal. She lived several years in Spain and was one of the African women who supported our foundation most in its early days. 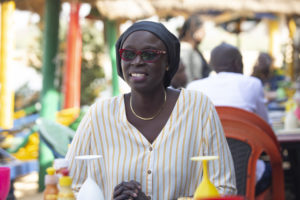 Senegal registered its first case of Covid 19 on March 2, 2020 in Dakar. A Frenchman returned from vacation with the symptoms. An imported case immediately taken care of in a local structure. The Ministry of Health then put in place a response plan to deal with the disease. Awareness-raising in all national languages, posters and explanations of barrier gestures and various outings by Ministry officials to explain the urgency of monitoring barrier gestures and other prohibitions.

But March 11, 2020 was going to mark a break in this response plan. A Senegalese emigrant living in Italy who had returned home for a religious holiday tested positive. This patient number 5 infected a total of 26 others, including his pregnant wife and a two-year-old child. The government’s response was swift.

At the Special Presidential Council held at the Presidency on 14 March 2020, significant measures were taken, namely the closure of schools and universities and a ban on religious gatherings and demonstrations.

A state of emergency was declared with a curfew from 8 p.m. to 6 a.m. throughout the country as of 24 March.

Preventive measures that were applauded and welcomed by the entire population. However, it must be acknowledged that most of these measures did not overcome the indiscipline and recklessness of some citizens. Indeed, in the streets, activities continued at the pace of every day, without precautions, disregarding all the recommendations of the health authorities.

To date, on Saturday 18 April, 350 cases have been declared positive including 211 cured, 3 dead, 1 evacuated to France and 135 still under treatment and in a stable state of health in Senegal.  But it is above all the so-called community cases (patients declared positive for the covid-19 virus and whose source of contamination is not identified) that are beginning to spread panic. The main recommendation is the wearing of masks and respect of social distancing. However, if this continues, the authorities will take more restrictive measures, i.e. partial to total containment.

Beware, the virus circulates freely in Senegal. It has trampled on the pillars of humanity and undermined the foundations of human dignity. There is no more possible clearance, you just have to respect the barrier gestures, stay at home and follow the recommendations of the health authorities and especially the wearing of masks.

How do we live it?

This pandemic has allowed us to pause and rethink many of our actions. At home, we are three generations of women sharing space with our men.

My mother is the first to implement preventive measures and encourages the whole family to respect them. She is very concerned about the disease, so she tries to find ways to deal with any eventuality and helps my adopted daughter to sew cloth masks.

I haven’t set foot in the office since March 2, but teleworking and social networks allow me to continue my activities with complete peace of mind. With everyone’s help, we organize brainstorming sessions and prepare the post-Covid 19 period.

As for my daughter, who is studying Civil Engineering, she has joined the family home and is working a lot on ecological house projects. She is also in charge of the calendar of scrabble moments and homemade cakes.

This break is especially an opportunity for us to share simple everyday things like gardening, classic films, cooking and challenges such as reading, stories and nursery rhymes. Days go by and the daily routine is punctuated with good and bad news, only mutual support and our crazy laughter motivate us in the face of this health crisis that has fallen from the sky.