Caddy Adzuba received the Princess of Asturias Award for Concord in 2014 in recognition of her struggle for freedom of the press, the reconstruction of peace and human rights, especially those of children and women in conflict areas. She has participated in several programs of the African Wpmen’s Foundation on numerous occasions.

Coronavirus: The DRCONGO has passed the milestone of 797 confirmed cases of covid-19 since Wednesday 06 May 2020.

The announcement was made by the multisectoral committee of the response to the pandemic of COVID-19 during a strategic meeting held in Kinshasa, the capital. DR Congo has 797 confirmed cases including 35 deaths and 92 cured, 526 patients are in good progress. Out of the 26 provinces of DR Congo, so far 7 are affected by the pandemic. 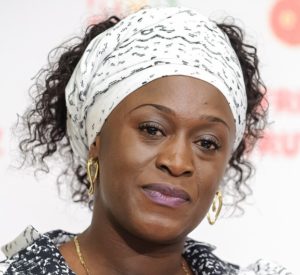 It all began in the Democratic Republic of Congo on 10 March 2020 in the capital Kinshasa, when the first case was identified. The situation created controversy among the country’s health and political-administrative authorities.

In the first week, pandemic management was hypothetical. Health structures were not sensitized and trained to care for the sick, hospitals and other health centres were not equipped and lacked qualified staff. Patients arriving at some health facilities were neglected and the care provided was not up to the task, a situation that led to deaths, with a prevalence of 30% of cases of death within the first week.   An effective response strategy was urgently needed. In view of the evolution of the pandemic which continued to spread slowly but surely, the president of the DRcongo, Félix Tshisekedi urged the government to take appropriate measures to deal with the pandemic throughout the DR Congo and particularly in the capital Kinshasa most affected by the Covid-19.

In the emergency, a response team was set up with Professor Dr. Muyembe at the head who returned in early March 2020 from another front which is the fight against the Ebola virus disease in eastern DRCongo. Several measures were then defined, including the closure of borders, a state of health emergency with the confinement of some towns in the DRCongo, the closure of schools, universities and all hotels, the population was made aware of the obligation to respect the barrier gestures and preventive measures. The population has been asked to remain confined in their house.

At the beginning of April 2020, the response committee informs that the situation is under control despite the soaring number of new cases and the lack of observation of barrier gestures by a large part of the population.

Despite the spread of the coronavirus in DR Congo, there is no time for panic because according to the estimates of some specialists, Africa is very lucky to be better off, unlike Western countries which unfortunately are experiencing a more virulent pandemic.

Despite the optimism of some specialists, others, on the other hand, think the worst for Africa. They refer to the inexistence of an adequate and adapted health policy, a social policy of care for the most vulnerable people and a crying lack of financial means to finance a large-scale health crisis.

The DR Congo is no exception.  But, according to the Congolese government, the DR Congo has the capacity to deal with the coronavirus pandemic given its long experience in the response to the Ebola virus disease.

So for DR Congo, prevention remains the key word.

However, despite the assurance of proven experience, the Congolese people are rubbing up against their government, which sets rules to be followed. Confinement, compulsory wearing of masks, systematic and mandatory hand washing, the socio-economic situation of the DR Congo does not allow its population to scrupulously observe the barrier rules established against the spread of the coronavirus. As the economy is informal for the majority of Congolese, it is almost impossible to remain confined to houses on pain of starvation. Going out in search of survival, walking the streets all day long to find money, selling at the market, driving a taxi, this is the daily life of 45% of the Congolese population. The rest of the population working in state enterprises and institutions with a modest salary cannot remain confined for fear of not being able to meet their vital needs.

Magaza Rachelle’s story: “I can’t stay home. What will my children eat?”

Congolese women are numerous in this informal sector of society. Their daily life is summed up in the day’s rate.

Magaza Rachelle, one of the many women selling fruit and vegetables in the streets of the city of Bukavu, South Kivu province in eastern DR Congo, said: “I am aware of the existence of this disease. Every day on the radio we talk about this coronavirus and the number of deaths it causes. It’s the same story with the advent of Ebola in this country. I also know that this disease is deadly and dangerous because according to the radio, it is transmitted quickly. Unfortunately, to avoid the disease and not spread it you have to stay at home. It’s a real shame. Because if that’s the way it is, we’re all going to die from this coronavirus. I can’t stay home. What will my kids eat? I live from day to day. I drive around the city selling fruits and vegetables if I don’t, who’s going to come and feed me? Certainly not the politicians of this country. Another thing, I’m asked to wash my hands, but I don’t have running water at home. I go to the lake to fetch water. I have 20 liters a day, the question is, will the water be used to wash my hands or will I drink it, use it for the needs of the house? It’s difficult for us. I can’t see my children dying of hunger, if coronavirus is going to find me in the street, I’m not going to die of hunger in any case. So far I can’t even satisfy my children. Let the government give us food and we will stay home, otherwise impossible. The streets are full, half the population is poor.”

In the DRC, although decreed by the government at the request of the health authorities, containment remains a slogan. Like some closed structures, large markets, commercial establishments and public transport have never ceased to function. Outside, life goes on in DR Congo.