We transcribe a telephone conversation between a mother in Yundum, a village near the capital Banjul, Adama Jammeh, and her daughter, Nato Jammeh, who lives in confinement in Madrid.

Adama is a woman activist and strong defender of human rights and especially women’s rights. Nato has studied a degree in Barcelona and a Masters at the Camilo José Cela University in the framework of the “Learn Africa” scholarship programme for African women.

In The Gambia, the concern is much more about not being able to go out and earn a living and get food for the families than the virus 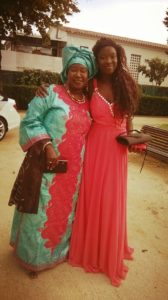 Here at home everything is alright, both the family and myself are fine. Everything is perfect.

How are things in the Gambia? Are there any cases of Coronaviurs?

It seems that there are some cases of Coronavirus, it is said that a young woman coming from England was the carrier of the virus, but she is already cured now. It is also rumored that a person of Lebanese origin contracted the virus and died.

(Here it should be specified that she says that the person is of Lebanese origin, but that she is not very sure. I have contrasted this with media reports stating that he is a preacher from Bangladesh who had been in other countries before coming to The Gambia.)

In total, it seems that there have been 5 infected people, of which only the person mentioned above has died.

What measures has the government taken?

– Schools have been closed since the Coronavirus was first declared a pandemic in mid-March.

– Baptisms and other mass events have been banned.

– The food markets have a restricted schedule and are only open in the morning until 2 p.m.

– The clothing shops are only open in the afternoon until 7 pm approx.

–  Mosques have been closed and people are not allowed to shake hands with each other. My goodness! How hard it has been to close the mosques in a Muslim country and on top,  coinciding with the Ramadan.

– On the radio they constantly inform people of the measures that should be taken to prevent us from becoming infected, above all they stress that we should not shake hands to greet each other.

How are people living with this situation, how does it affect their lives?

Well, Nato, it’s not forbidden to go out like in Spain, the thing is that here, if people don’t go out to earn a living they won’t eat, it’s as simple as that. So people do go out and lead relatively normal lives. However, at the entrance of each house there are basins for washing and disinfecting.

The other day I went to Tanji Beach with your father (it’s the busiest beach in the country as  the fish market is there) to get fish, and it was full of people. Too bad I didn’t have my cell phone with me to take a picture. There were many people and in groups. But as I say, here it is complicated to control the flow of people in the markets and to respect the rules of distance as it is done in Spain. But of course, there are also restrictions on the opening hours, and 1 pm is the deadline.

The point is that in any case, the majority of the people must go out, to fish, to grow crops or  to sell at the markets, because as I have said, if not they cannot get food for their families. You can’t separate or confine people, Nato, they have to go out to get food.

Thank God, except for the cases I told you about before, there are no more known cases of Coronavirus. I hope it continues like that, because if the virus develops in a poor country – dear me! –  many people would die. I hope that in those countries where the virus currently is, it will soon disappear and where it has not reached or there are few cases, it will not develop.

Is the general population concerned or distressed about the virus?

Well, frankly, they are much more concerned about not being able to make a living than the virus.

And what do children do if they don’t go to school?

They go out to play and shop, you can’t lock children up here – it’s impossible.

Thank God, we are well,  personally, although I have not been able to return to Barcelona, I am well, after all I´m in my country, with my family, my mother and my grandchildren, we play, we laugh, we also have our daily quarrels, of course, (she laughs), but we are happy.

That’s all dear, love and take care. Thank you.