Michelle Lora is an Ivorian writer and academic. She has been vice-president of the Writers’ Association of Côte d’Ivoire since 2011. A cultural ambassador, international speaker on gender, culture and children’s literature, business manager and coach, marriage and family counselor, sexologist, radio columnist known as “Dr. Love”, writer, academic, she is multidisciplinary.  In 2014 she took part in the First Congress of African Hispanic Women organized by the Women for Africa Foundation in Abidjan. 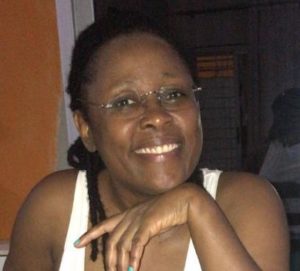 A month and a half after the first case of the disease appeared, Côte d’Ivoire registered 1111 infected people, 449 cured and 14 deaths.

The authorities have taken several measures to control the spread of the virus and to care for those affected. In the Ivorian health system, a large part of the population does not benefit from medical coverage and only these patients are treated free of charge.

Schools, universities and most businesses have been closed, and the government has launched a campaign to help the most disadvantaged people.

Companies are giving priority to teleworking, which considerably reduces the movement of people in the Abidjan region and in the big cities. However, in rural areas, teleworking is not possible. From these areas, we also do not know any data on the impact of the coronavirus, even though many people from Abidjan have settled there.

At the beginning of the pandemic, no containment measures were put in place because the disease and its mode of spread were unknown. In the face of this rapid progression, the government tightened measures but did not move to full containment. It is still possible to go out on the street if you wear a mask.

Abidjan, the capital of Côte d’Ivoire and the gateway to Covid19 in our country, is confined. Apart from vehicles carrying medicines, fuel and food, no transport is allowed between Abidjan and other cities in the country.

In view of the measures taken, the action of the authorities is not the most appropriate. Politicians are making the fight against the spread of the virus a political pre-campaign: the distribution of food and hygiene products is presented as “personal donations” from the leaders and not as donations from the state coffers and therefore from the taxpayer. They even made bags, T-shirts or caps in their own image.

Such behaviour is condemned by the opposition and sectors of the population, but is ignored by the leaders who, moreover, use social networks to praise the government’s actions and, moreover, the media are not free to inform democratically. Information is therefore always made for partisan purposes.

It is said that schools will open on 18 May, while the epidemic, as confirmed yesterday by a health official, has not yet reached its peak and we are on the upward phase of the growth curve of the spread of Covid19 .

How can we be reassured knowing that classrooms are overcrowded, that there are not enough teachers and that they are not prepared?

Prices have risen considerably. Hydroalcoholic gel, masks and food are reaching exorbitant prices. The majority of the population works in the informal sector. With the closure of businesses, the economy has slowed down. Poverty has increased. The vulnerable population lives even more precariously.

Recently, the government has been distributing money via electronic money to the poorest populations. In a country where the poorest people do not even have mobile phones and do not have access to electronic transactions, the question is what the selection criteria are and how they are applied. To this, the minister in charge of solidarity replies that they have a database. The beneficiaries are the government’s supporters, so their testimonies are not credible. On this issue, there has been a protest movement through social networks. 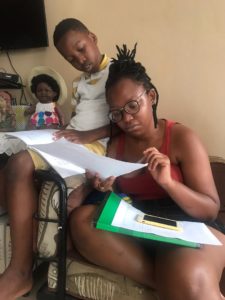 The university is closed and we communicate by e-mail. However, I continue my psychology consultations some afternoons.

I am the head of a single-parent family. I have three children: a 19-year-old girl and two boys aged 11 and 15. To minimize the effects of confinement, I have organized my family life in a very inclusive way. We have common activities (games, dancing, movie nights, discussions, reading, cooking story nights and sports) and everyone has their own personal time. They stay in their rooms so that everyone can do what they want. At the moment, my eldest daughter is re-reading my latest manuscript, a novel. She will give me her opinion before sending it to the publisher.

I am a writer and storyteller: activities in this field have slowed down and to keep my readers and encourage families to read, I have launched a contest called LecTour-Challenge. Candidates read a text of their choice and send me a 2-3 minute video. The videos will be evaluated by a selection committee of fellow writers and the “Likes” will also count.

Our family life rhythm is very disrupted because bedtimes are completely out of sync, as are meal times and family prayer. Sometimes my children spend sleepless nights playing video games and then sleep during the day. I scold them, but in the current situation, we need to be more flexible.

We take advantage of the confinement to spend quality time. My children respect the confinement and stay at home. The icing on the cake is that, unlike other families where teenagers are in crisis, we are in the middle of a break at home and I am grateful to God for allowing this to happen. 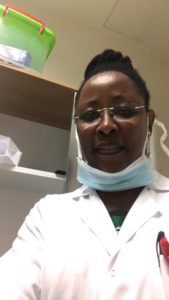 I am particularly sensitive to this aspect of confinement because I sometimes take part in televised debates. In my analysis, confinement leaves us in front of our families as we formed them. Many parents focus their lives on work, purchasing power, buying goods, but have neglected the quality of relationships within the family. This creates discomfort and an increased demand for psychological counselling. There is an increase in marital and family crises. In my office, only one couple told me that they had taken advantage of the confinement to get closer and that they were happy to be together. I was happy to hear that because I feel that my work is not in vain, but in general, confinement aggravates family crises.

The greatest difficulty for mothers is the daily care of their children. In my office we exchange advice and discuss solutions to their problems. The domestic burden rests mainly on them and fathers often neglect it. I observe that the men continue their social life, meet friends or go to the pub. In some neighbourhoods, men still play sports together despite recommendations to stay at home. Women only go out to do household shopping or to work if they are in the informal sector.

We do not all understand the pandemic in the same way.  By working in a hospital, I consider myself a risk to my family and to others. So I don’t see anyone and I don’t allow them to come to my home. This is sometimes misunderstood. People think I exaggerate. I was hospitalized for back pain last week. My mother and brothers wanted to come and visit me. I told them it was forbidden. However, one of my aunts, despite my insistence, came to see me as soon as I left the hospital. The fact that I gave her a hydroalcoholic gel and walked away from her offended her and she did not come back, nor did she call me.

A very close colleague got married in the middle of lockdown. He blames me for not going to his wedding and not caring about him. From my point of view, it seems really inconceivable that people would be forced to take such a risk to attend a wedding ceremony.

In conclusion, I am convinced that my life will not be the same after confinement, but I cannot say in what way.